Sample Rates, Bit Depths, MP3, WAV, AIFF, What does it all mean?

In this article we aim to cover some audio format basics.

When you configure your project in your DAW (check our terminology for this) you will have a selection of Sample Rates and Bit Resolution (we’ll cover file types a little later down).
By default these are normally set to CD audio quality, which is 44.1 kHz at 16 bit depth.
Now what does all that mean?
Kilohertz (kHz) or Hertz (Hz) is a measure of frequency in one second. So 1Hz is basically 1 cycle second – imagine a light flashing on/off once per second – this would be classed as a 1Hz cycle time in basic terms.
In computer audio terms, this is how many digital ‘captures’ of sound it will take.
Confused?
Sound in the real world, for example, from you speaking / singing etc., travels in waves. When these waves are recorded in the digital realm,  the frequency and bit depth come into effect, as computers operate as lots of ons and offs, or 1’s and 0’s which are called bits.
These great diagrams from this article should help (many thanks to Mastering The Mix for permission in using these): 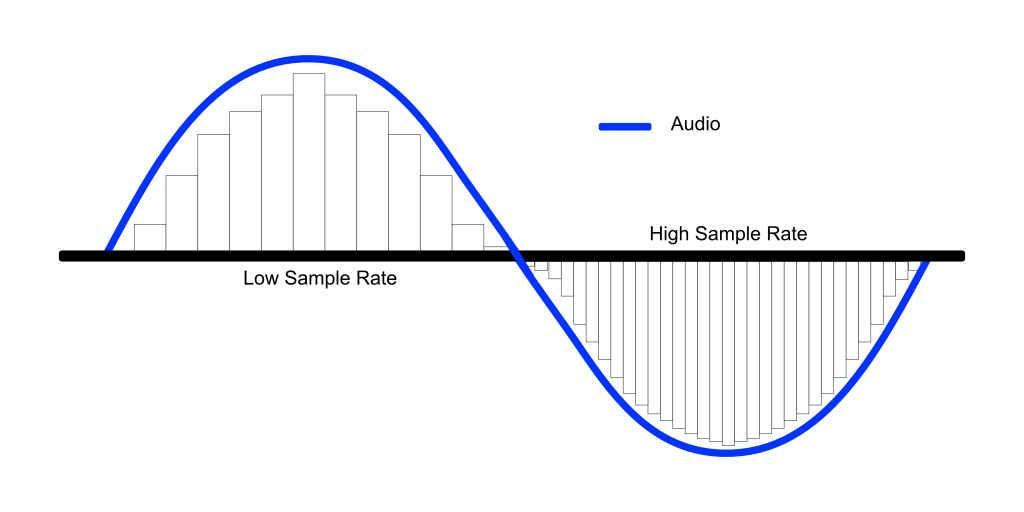 As you can see, a higher frequency results in a higher number of ‘captures’.

Now see how the bit depth comes in to play:

Now you can see that the bit depth is how many ‘bits’ of data the computer has used to capture the sound. The more bits are used, the higher the quality.

Both the frequency and bit depth effect the overall quality of the capture, however as with most things with computers, the more data they have to process, the more power and resources (memory, hard drive space) they need. The same rules apply here.

However bit depth also effects the dynamic range of the audio. This can really help capturing audio that has a greater range, such as a vocalist who may vary in volume considerably. Rather than placing a compressor in the microphone chain, set the record / line level / gain much lower (to accommodate louder vocalist), and record at 24 bit resolution which has a much lower noise floor. You can then raise the levels in your DAW without introducing unwanted noise.

The files used to capture all this information would be capture as ‘uncompressed’ types, such as WAV or AIFF. These files can be quite large and take up valuable computer storage space.

‘High Res’ audio has become a well known phrase, and this basically refers to 24 bit audio (at  96kHz usually), however these are much larger computer files, and require much more processing power to produce.
It is highly subjective as to whether people can actually hear the difference between CD quality (16 bit at 44kHz) and 24 bit. I won’t comment on that 🙂

Now the bit depth mentioned in this post, is not to be confused with Bit Rate that is associated with MP3 files.
MP3 file types are classed as ‘lossy’ formats. The bit rate used basically defines how much of the sound is kept to effect the size of the file. The higher the bit rate, the more is kept, and the higher the listening quality. The lower the rate, the more sound is thrown away, the smaller the file is, but the quality has also dropped.
You may have also hear of FLAC files? This stands for Free Lossless Audio Codec. These files are smaller than their WAV / AIFF equivalent but uses a mathematical equation to reduce file sizes, whilst maintaining quality.
FLAC doesn’t quite have the same level of support out their, compared to MP3, but it seems to be increasing in popularity slowly, which is great news.

Hope this has helped you understand this aspect a little better, and I must again thank Tom over at Mastering The Mix for providing permission to repost these images.

This site uses Akismet to reduce spam. Learn how your comment data is processed.